Real-world sports stadiums have been the anchors for commercial districts and the power behind the revitalization of parts of cities that have fallen into disuse or disrepair. SoFi Stadium, for example, breathed new life into Inglewood, California, to the tune of a 148% increase in housing prices between 2014, when the project was announced, and the end of 2021.

SoFi as an anchor for an entertainment district, as it turns out, created a lot of synergy and made people more likely to want to engage with other things in the area. And this is just one of many examples of sports facilities that seem to have a sort of magnetic pull on everything around them.

So, when Manchester City, the English soccer team, announced plans to build a metaverse copy of its Etihad Stadium (dubbed e-Tihad Stadium), metaverse real estate investors and enthusiasts understandably started paying close attention. It will be the first-ever professional sports stadium built in the metaverse. What will this mean for metaverse real estate? 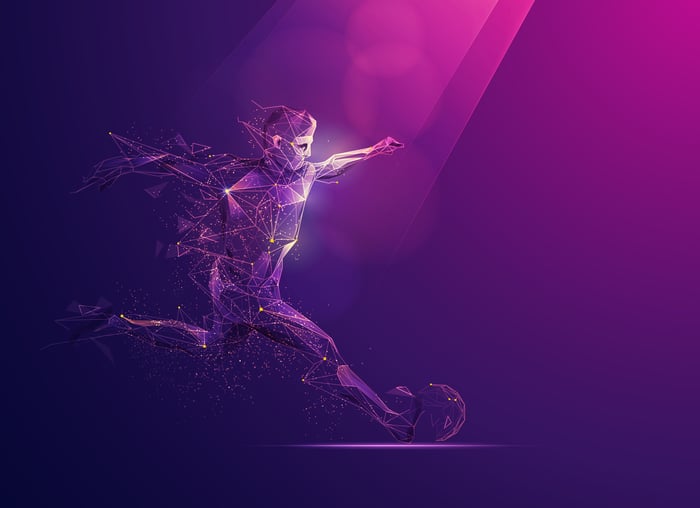 Sony and Manchester City bring sports to the metaverse

The metaverse has mostly been the realm of crypto investors, NFT enthusiasts, and fashion brands looking to get in early before everyone else figures out how to make this realm really work for them. But more and more, less typical businesses are finding their places in the metaverse every day, so it’s not at all surprising that a sports team would make the leap.

Manchester City will use technology from Sony ( SONY 1.06% ) to build a virtual replica of the soccer team’s home stadium.

The exact plans are unclear at this time, but reporting in Cointelegraph indicates that a virtual stadium is definitely coming, as well as associated collectible non-fungible tokens (NFTs) that will help increase the team’s revenue.

Will e-Tihad spur more sports activity in the metaverse?

Because the metaverse is a place for everyone, with all sorts of interests, it’s really surprising it’s taken this long for a sports team to step into the fray. But Manchester City is not the only one getting its feet wet in the metaverse. Manchester United is now following the lead of Manchester City and jumping into a metaverse-like experience, though details are scant.

It’s likely that these are not the only sports teams considering giving themselves a metaverse boost, especially with the recent land boom across metaverse platforms. It seems like nearly every day, a new big name is coming online — and not just the kinds of companies that you might traditionally expect.

For example, Acura, owned by Honda Motor Co. ( HMC 1.13% ), just built its first metaverse showroom in Decentraland ( MANA 2.79% ), a metaverse platform where there’s absolutely no reason to own a car.

There are absolutely no numbers right now on what would happen if a sports stadium were dropped in a remote part of Decentraland or The Sandbox ( SAND 3.30% ), for example. But as we’ve seen time and again, metaverse real estate often acts very much like real-world real estate. If you build in a high-traffic area, such as near a popular event space, it tends to get more visitors — and more people explore other things nearby as well.

Even though users can teleport around the map, they can also see what’s near them when they’re entering a building, like a virtual stadium. The teleport system drops them outside, where the neighbors on the street are easy to see.

So, if you happen to place a virtual Panera (with metaverse-to-home delivery) right next to the virtual stadium, hungry soccer fans looking for snacks for the game are likely to take advantage because it’s quick and convenient.

Should you invest in metaverse stadium zones?

If you have a business that makes sense to pair with a sporting event, then clustering near a sports stadium in both the real world and the virtual one just makes sense. In the real world, you get a sort of physical synergy, but it’s not so different in the metaverse. There, clusters of similar businesses become districts, like the currently popular Fashion District in Decentraland.

These districts can form communities that generate more value together than they ever did alone. The Fashion District, for example, just wrapped up the first-ever Metaverse Fashion Week, which seemed to be a great success and was absolutely a community effort. The numbers for that event should come out soon, but I expect to hear nothing but good news based on its popularity alone.

Because of the potential to create sports- or team-themed districts, there stands to be huge potential in metaverse stadium-adjacent real estate, whether you build a virtual sports NFT shop or other related experiences.

Like with any metaverse real estate investment, you’re taking a risk that your property might drop in value or your business might not succeed, but incoming sports stadiums will offer unique opportunities for investors and denizens of the metaverse alike. After all, the metaverse is a space that’s all about experiences you can’t have on the traditional internet, and what’s more experiential than a soccer match with friends from across the country?

This article represents the opinion of the writer, who may disagree with the “official” recommendation position of a Motley Fool premium advisory service. We’re motley! Questioning an investing thesis – even one of our own – helps us all think critically about investing and make decisions that help us become smarter, happier, and richer.